Mary works full time but is nearing retirement. She owns a home and handles all the upkeep by herself. She likes to spend time with her grandson as well as reading books but often feels rushed and like she doesn’t have enough time for what matters to her most in life.

James had multiple IRA accounts from previous employers, but they were a complete mess. If there was a way to consolidate their financial assets, the couple was all for it.

They simply didn’t have the time to dedicate to it. As she was approaching retirement, Mary was looking for someone she could talk to about managing her financial resources.

She had accumulated a large sum of money, but her income and bonuses were constantly shifting, making it harder to manage and plan herself, especially as she was feeling stretched for time already.

In retirement, she was looking for more stability overall. Growing her financial resources was no longer her primary concern. She wanted the reassurance that her financial future was secure.

James and Patricia’s daughter in law recommended a financial planner to them, but at the time, retirement wasn’t even on their radar, as they were concerned that they didn’t have enough money to retire.

In the past, Mary had partnered with different financial planners. Unfortunately, she often felt pressured into utilizing certain products and didn’t personally connect with her prospective partners.

Mary knew that she needed to partner with someone she could trust, as her savings were substantial, and she didn’t have the wherewithal to oversee it. She simply couldn’t find the time to oversee her financial life.

At first, she started studying the market and even read financial blogs to find reliable information. But she soon realized she didn’t want to do everything herself. She wanted to partner with someone who was either retired or was approaching retirement themselves.

Despite past challenges, Mary knew she wanted an experienced partner to help with managing her finances. So, she started looking specifically for a financial advisor who had experience with a clientele who were retired or approaching retirement.

Mary finally found a partner who met her requirements, and she got the guidance she was looking for. A five-year plan was set in place to help ensure a stable financial future. It’s not perfect, and course correction has been part of the process, but overall, Mary is relieved now that she has a plan to fall back on.

Having found the right financial planner, Mary feels freer mentally and emotionally. She can enjoy her day-to-day life a lot more and doesn’t feel rushed all the time. She has peace of mind that her financial life is stable, and she can engage more fully in everything she does – whether it’s spending time with her grandson or reading a book.

Note: The above case study is hypothetical and does not involve an actual Fairchild Capital client. No portion of the content should be construed by a client or prospective client as a guarantee that he/she will experience the same or certain level of results or satisfaction if [company name] is engaged to provide investment advisory services.

Ready To Get Clear About Where You’re Going In Retirement?

Click Below To Plan Your Journey With The Retirement Destination Roadmap™ 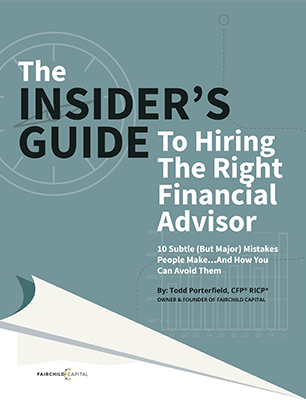 Want To Pick The Right Advisor For Your Unique Situation?